Source: Alex Norris of webcomic name | Description: a 3 panel comic featuring a humanoid pink blob against a blue background. First panel: they are standing beside a sign with a Pride flag with a speech bubble that states “I can’t wait to go to LGBT+ pride”. Second panel: the speech bubble reads “& see all sorts of people celebrating who they are”. Third panel: they are looking at a road with three cars that have “corporation” written on them and rainbow flags on top of them. A banner reading “Pride Parade” waves above it. The speech bubble coming from their mouth reads “oh no”.

Every May queer and trans people can feel it coming. The rumbles of “limited Pride collection” and “fun” takes on the acronym (like Marks & Spencer’s Lettuce Guacamole Bacon Tomato sandwich from 2019) begin, and slowly but surely the logos turn rainbow as every business that wants that sweet queer cash begins to market to the 2SLGBTQ+ community and allies.

If you haven’t seen this phenomenon by now all you have to do is check out the social media accounts of any large company or brand, from Oreo to Shoppers Drug Mart to AT&T, to witness this “painting the feeds rainbow” campaign season in action. Companies like Target take it a step further than others by releasing questionable Pride collections, connecting Pride and capitalism in a way that elicits quite a mix of reactions from the diverse 2SLGBTQ+ community worldwide.

All of these campaigns, whether or not they include just a logo change or a collection that donates a small amount (compared to these companies’ profits) to a 2SLGBTQ+ charity or non-profit, fall under the ever-growing umbrella of a concept some love to love and others love to hate: rainbow washing.

What is “rainbow washing”?

Rainbow washing (or Pinkwashing or Rainbow Capitalism) is “the strategic marketing move deployed by large brands with the aim of selling Pride-themed merchandise and capitalizing off of Pride month” (@soyouwanttotalkabout on Instagram). As 2SLGBTQ+ identities become more and more accepted every year in heteronormative, mainstream societies, more brands hop on the rainbow washing train to capitalize on a celebration that is, in many senses, antithetical to their essences as profit-driven corporations: an uprising against oppressive institutions. To learn more about rainbow washing, check out this video from queer YouTube creator Rowan Ellis:

The Bad and the Ugly

When we look into rainbow washing, we begin to realize the varying degrees of it that exist. The most harmful forms include companies who take the month of June as an opportunity to brighten up their logos with a Pride flag, all while continuing to directly support discrimination against 2SLGBTQ+ communities and other marginalized groups.

Other companies simply post #HappyPride, inundate us with colourful products to consume and leave it at that. Through this method of slacktivism, they wrap themselves up in a neat little (rain)bow to present themselves as tolerant and inclusive, but do nothing to really advocate for 2SLGBTQ+ communities and push for much-needed change on an ongoing basis. For many of us, this form of rainbow washing feels exploitative and pandering.

That being said, here are just some of the many companies who call themselves allies every June, but whose year-round political and financial contributions tell us otherwise:

Walmart, McDonald’s, Amazon – Walmart, McDonald’s and Amazon have all been vocal in their support for Pride Month. However, according to an article from Insider, each of these corporations donated hundreds of thousands of dollars to politicians who voted against the Equality Act in the U.S— an act aimed at implementing explicit anti-discrimination protections for LGBTQ+ people in various sectors.

YouTube – For many 2SLGBTQ+ folks, YouTube has always offered a safer space for us to find community, information and representation. In fact, this year, the platform will be hosting a virtual global Pride celebration and donating to several LGBTQ+ organizations. However, it is still important to recognize that YouTube has a history of homophobic and transphobic censorship, content suppression and demonetization simply for being queer and talking about queerness.

Disney – This month, in typical rainbow washing fashion, Disney released their “Rainbow Disney Collection” with products ranging from backpacks, to mugs, to face masks. They will be donating a portion of the funds to various LGBTQ+ organizations and are even working toward providing more inclusive spaces and policies for their employees. On the surface, this is great! However, as one of the largest media conglomerates in the world worth over $120 billion, it is literally the least they could do. Not to mention, Disney has yet to give us any real, explicit and adequate queer representation. This primarily stems from fear of “rocking the boat” and threatening the promise of profits with heterosexual, cisgender characters.

Domino’s – Although this pizza restaurant chain tends to claim full support for the LGBTQIA+ community, its executives and owners have a history of donating to conservative, anti-queer organizations and individuals. In fact, they donated in excess of $445,000 to the Republican Party and candidates for the 2020 Presidential Election alone.

Now, don’t get us wrong. Representation is extremely important and we are so happy to see it. The fact that rainbow washing exists is, in itself, a sign that we live in a more hopeful time. However, time and time again, corporations who commodify 2SLGBTQ+ lives receive high praise for doing the bare minimum for us. We must recognize that we deserve better.

Fortunately, some companies, organizations and individuals resist rainbow washing and actively work to support 2SLGBTQ+ communities in genuine, ongoing ways. They promote positive and diverse representations of the queer and trans experience; offer inclusive products; provide suitable donations to 2SLGBTQ+ organizations; and work directly with queer and trans creators. Check out our list of businesses doing this great work below/The following are some of the businesses doing this great work (bonus: they are all queer-led!):

A queer clothing shop created by FTM transgender activist, Aydian Dowling (he/him). They donate a portion of their proceed to their sister organization, Point of Pride. To date, they have awarded over $130,000 in direct financial aid towards gender-affirming surgery and permanent hair removal services, as well as donated thousands of chest binders and femme shapewear to folks in 57+ countries.

The Phluid Project is all about gender-free fashion, community, activism and education. They also support a variety of TQBIPOC (Trans, Queer, Black, Indigenous, People of Colour) brands.

dfrntpigeon is a queer-led social enterprise apparel and lifestyle brand. They work with marginalized youth and support them in developing their creative abilities through paid design work and mentorship. They also collaborate with queer local artists every year.

Bianca Negron (she/they) is a queer gender-fluid Latinx designer and artist who creates stickers, pins, hats and t-shirts to provide representation and visibility. Our personal favourite is their Deaf and Queer line!

The Gaysian sells tees with designs like “Asian, Queer, Proud”, “Trans (Form) Asian”, “Unapologetically Queer,” “Supergay,” and “Gaysian in Distress.” The shop designer, Ann, who is bisexual and based in Malaysia, wanted to make shirts for “other queer Asian people out there who are so unapologetically themselves” in hopes of seeing “at least part of my identity being showcased in different parts of the world through wonderful, brave people.”

Based in San Juan, Puerto Rico, Sabor a Libertad is a non-binary clothing, accessory and feminist art store aimed at making clothes that represent trans and non-binary people. Their products are designed by Puerto Rican artists and come in both Spanish and English.

gc2b is a trans-owned company committed to providing accessible, comfortable and safe binding and clothing options designed by trans people, for trans people. Over the past 3 years, they have also supported over 100+ 2SLGBT+ organizations and donated over 6000 chest binders.

Keep It Queer is a Toronto-based initiative from Inside Out all about buying, hiring and supporting queer artists. Check out all the ways you can support 2SLGBTQ+ communities on their website.

Here are some tips and tricks to wash away those disingenuous rainbows and create a clear picture of what it really mean to support, advocate and uplift 2SLGBTQ+ communities:

1. Research the company: Do they offer year-round support to queer and trans communities in social, financial and/or political spheres? Do they consistently refuse to support people, policies and institutions that harm queer and trans folks? Are 2SLGBTQ+ communities represented at all levels of employment, including high-level positions? Is the company open to receiving feedback from marginalized groups? Do their policies support intersectional marginalized identities (e.g. 2SLGBTQ+ individuals who have disabilities or are racialized) or do they harm some members of the broader 2SLGBTQ+ community?

2. Look into how the product is being promoted: Is the company explicit and transparent in how they are supporting 2SLGBTQ+ communities? Are they supporting any 2SLGBTQ+ organizations or individuals? Have they indicated how much of the proceeds will be going to them and, if so, is it an adequate amount? Do the promotional materials represent a wide range of queer and trans identities that go beyond images of white, skinny, cisgender and able-bodied people?

3. Check out the product itself: Is it made by and/or for 2SLGBTQ+ folks? Is it inclusive and accessible for marginalized groups, such as 2SLGBTQ+ identities, BIPOC communities and people with disabilities?

4. Take care of yourself: There is already a limited number of organizations making an active and genuine effort for 2SLGBTQ+ communities. When we take other barriers into consideration, such as financial barriers (e.g. many queer and trans folks experience hiring discrimination, hostile work environments and other forms of oppression that make full economic participation impossible) and physical barriers (there are many less options for queer and trans people in bigger bodies when it comes to clothes in general—not to mention Pride-themed clothes specifically), the options become even more limited.

If you end up giving in to rainbow washing, don’t be too hard on yourself. In a world where our bodies and identities are so often mocked, erased, tokenized and harmed, buying that rainbow mug can be a way to validate and take care of yourself. What matters is that we remain committed to being mindful of what we are buying, who we are buying from and whether or not we are contributing to the very issues that make Pride month remain an important and necessary celebration for many 2SLGBTQ+ communities and individuals.

Want to learn more about rainbow washing? Check out some of resources down below:

What Is “Rainbow Capitalism?” | The Young Turks

What is rainbow washing? Celebrate Pride Month without getting fooled! #shorts | Blair Imani

Progressive Shopper offers a simple, accessible way to find out how companies are spending their money. They provide up-to-date data on the political contributions of major corporations and the individuals working for them.

Who Made My Pride Merch is a social media campaign that asks brands who really makes their Pride collections. They stand in solidarity with LGBTQ+ garment workers worldwide. 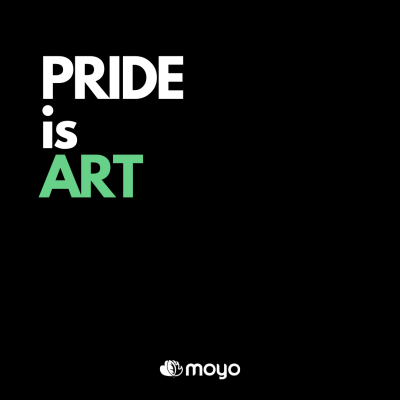 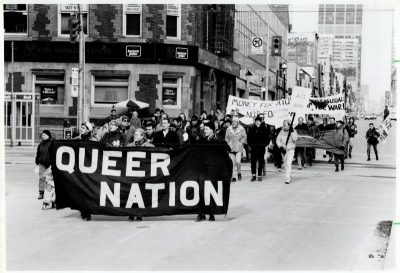